As many of you I couldn’t wait to try out Visual Studio 2010 Beta which was released this week. It was also a nice opportunity to try out the “boot from VHD” functionality now available in Windows 7 so I could use the full power of my machine without having to install it on my developer machine.

There are several good resources on the web how to make your VHD bootable and bring it up in your Windows Boot Menu. One of the more detailed and well documented posts is the one from Scott Hanselman.

There is however one caveat that isn’t mentioned yet. One of the nice features of virtualization is that your machine only takes up as much hard disk space as it requires and can grow automatically over time. It’s a common ‘mistake’ to keep the hard disk size on the maximum of 127GB when creating a new dynamically expanding VHD, since it won’t use that much space if it’s not needed. When booting from this VHD, Windows now tries to expand the VHD to the full size defined (in this case to 127GB). If the volume on which this VHD is stored doesn’t have enough free space, you’ll get treated with a nice blue screen similar to this one. 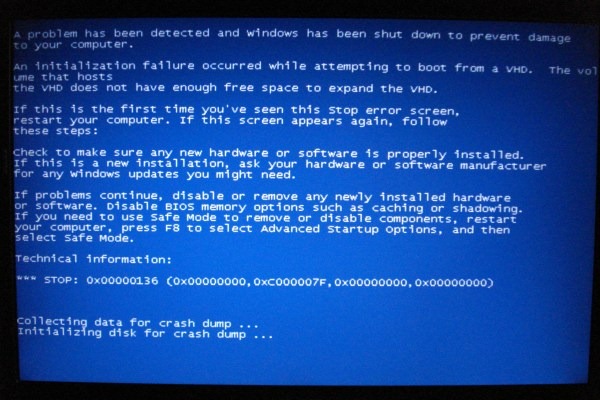