I have written about Bicep templates for Azure Landing Zone before. However if you have a look at the starter Azure DevOps pipeline you will notice that the complete deployment flow is covered by a single job with a bunch of tasks. This means that on every release you will run all modules (at once).

This is time-consuming, but also requires the infrastructure team(s) to be aware of common development practices like using feature branches to prevent accidental incomplete work to be deployed. In larger organizations you also have multiple teams working on different aspects of the Landing Zone setup.

One option could be to start spreading out into multiple pipelines (or even repositories), but personally I prefer to keep related things together. In the past I have deployed ALZ through (classic) release pipelines, which allow you to easily create multiple stages. However, YAML pipelines are taking over so it is time to see if we can do the same there.

As always, Microsoft has great documentation on multi-stage pipelines so be sure to read that as well.

In short, you can map a YAML pipeline to:

A job could also be a deployment job, which runs against a specific environment and has a deployment strategy. More on this in the next post.

If we look at the sample starter Azure DevOps pipeline again, we can quickly see that these levels can be optional and the YAML script started directly at the jobs collection. Since there is only one job, it could even have started with the steps collection.

In the classic release pipeline, you would have created a new visual block for your stage, here we’ll have to edit the YAML definition. It is very important to know that YAML is space-sensitive and each new collection increases the indentation by 2 spaces.

I use Visual Studio Code, which correctly maps a tab to two spaces in YAML making life a lot easier. As a good practice, I also try to give my stages and jobs a name and display name.

It is up to you to define which tasks and/or jobs you want to combine in a single stage, I went for this combination.

Most of these stages still have multiple tasks which are related or can be combined, e.g. creating the networking resource group and creating the actual resources. Important to notice is that I have defined links between stages with dependsOn (line 43) to make sure some stages are deployed before others when executed completely.

It is still possible to select only a few stages, but then you have to check if the predecessors ran yourself. 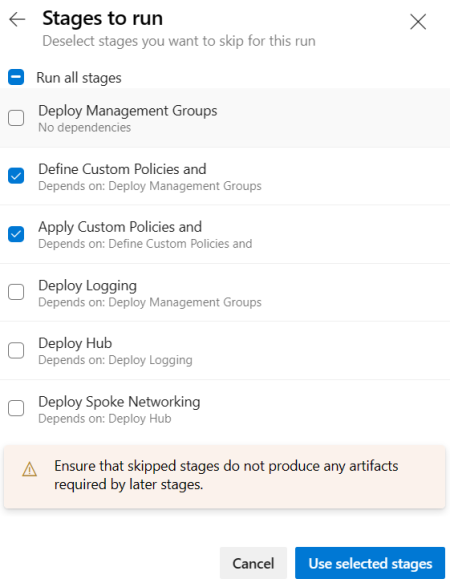 And finally (a fragment) of the modified YAML pipeline:

In the next post we’ll continue on this pipeline to add approval steps.

Review ARM changes before your pipeline deploys to Azure

The need for Azure Governance